Top 10 Poorest Countries in the World: Earth has enough resources to make sure that the whole human race can afford basic living standards. Also, there are few countries like The Democratic Republic of Congo, Burundi, etc., where people are lacking basic amenities for life and are living in extreme crisis and poverty.

According to Eli Khamarov, there can be various factors responsible for a country being caught in the vicious cycle of poverty. Corrupt government, colonization, war, extreme climatic conditions, and the weak rule of law are few. It is called a period because if a country is in debt then, it is usual that it cannot afford better education, health, and other services for its people which in turn, stops the country from developing, and also foreign investors are not ready to make Investments in these countries. So ultimately, the room for coming out of this poverty becomes very restricted.

Currently, the ratio of people who are living in extreme poverty (that is below $1.90 per day) has reduced to 10%. However, the Corona pandemic has hindered this process, and it has created many problems for the impoverished countries of the world.

In this article, we are going to talk about the top 10 poorest countries in the world. We have prepared this list by considering GDP based on PPP (Purchasing Power Parity).

It is a small landlocked nation having a population of about 12 million people. Unfortunately, this country ranks on the top of the list of the top 10 poorest countries in the world. More than 90% of its people depend on subsistence agriculture for their living and survive on less than $1.25 per day. Even water and sanitation are not available to most citizens, and only 5% of the population has access to electricity.

Food insecurity is a big issue, and its scarcity is almost double compared to sub-Saharan African countries. Civil war and ethnic conflicts are the primary reasons which obstructed the development of this country.

This country is not poor, but its people are. It has enough resources of Uranium, Gold, and Diamonds, which can help the country come out of poverty. Still, because of poor infrastructure and the inability to exploit the resources properly, this country remains the second poorest in the world. There are many disputes and anti-government rebels that have hindered the development of the country.

The gap between the Christian majority and the Muslim minority also contributes to many internal riots. It is showing some signs of development, but still, it has to go a long way.

The Democratic Republic of the Congo

This country is the third poorest in the world. According to the World Bank, this country can make significant development and become one of the wealthiest nations among the African countries.

This country has large hectares of arable land, mineral resources, and precious metals, which can be exploited. Still, the instability of the government, weak system, and corruption have hindered this process. Most of its population is living on less than $2 per day.

This African country is amongst the least developed countries in the world. With just a population of 3.2 million, this country has resources, but it is hard to exploit them because of the weak rule of law and the corrupt system.

Around 80% of its population is dependent on subsistence agriculture. The Nation is highly militarized, and climatic conditions and fluctuation in prices are a significant threat to its development.

Also Read: Top 10 Most Populated Countries in the World

It ranks on the 5th spot in our list of top 10 poorest countries in the world. Almost 80% of its territory is covered with the Sahara Desert, and its citizens mainly rely upon small-scale agriculture for survival. The rapid increase in population, disease and mortality, internal conflict between ethnic groups, and the inability to efficiently extract available resources like reserves of gold and Uranium are the leading causes of poverty in this Nation.

In recent years, a stable government has helped this country to develop, and its per capita GDP has risen from $975 to $1200 during a span of ten years from 2010 to 2020. It is a small African country, and poverty is widespread, with most of the population relying on rain-fed crops. Malnutrition and food insecurity is a big concern.

This country has enough water and mineral resources along with large arable fields for agriculture. Yet, this country is poor. It had experienced a disastrous civil war and other conflicts, which has made this country so backward. Recently, a company made a $15.8 billion investment to support a natural gas project.

It has remained in the list of the top 10 poorest countries of the world for the longest time. This country was able to fix conflicts and secure peace and stability in governance after the 2003 civil war. Still, the government was not able to bring reforms and structural changes to make the country prosperous.

The Ebola epidemic affected this country mainly in 2014, and it is struggling to ensure adequate food, employment, and production in the country.

South Sudan was formed in 2011 and is a new country with a population of 11.2 million people belonging to over 60 indigenous ethnic groups. This has also caused many conflicts, which resulted in the loss of a massive number of people. The country has the potential, but it hasn’t been able to utilize them. Most of its people are engaged in traditional agriculture, and frequent violence is widespread.

Also Read: Top 10 Most Populated Cities in the World

One exciting fact about this country is that it has prosperous Diamond resources, but it is in the list of the top 10 poorest countries in the world. The main reason for this is the civil war which took place between 1991-2002.

More than 75% of its peoples rely on small-scale agriculture, and lack of infrastructure, education, corruption, and economic reforms are the main obstacles in the path of the development of this Nation.

I hope you enjoyed reading this article about the top 10 poorest countries of the world. Follow us for more such content. 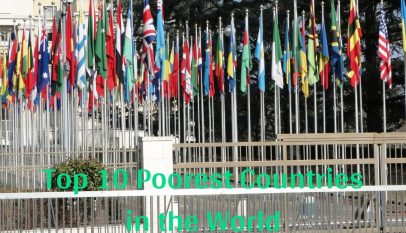